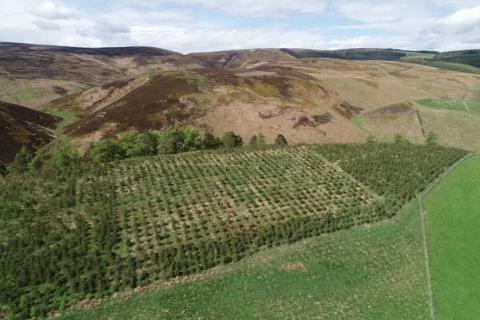 This long-term experiment is tracking how pine trees grown from seed from Caledionan pinewoods across Scotland respond to climate change, pests and diseases.

Background to this work. The great wood of Caledon – Scotland's iconic native forest - has suffered dramatic losses over thousands of years, and today our Caledonian pine forests cover only 1% of the land area of Scotland. Both human activity and climate have played their part in this decline: felling, burning and grazing have been ongoing for many thousands of years and about 4000 years ago the climate became cooler and wetter, leading to faster peat growth in some areas which made it harder for pine trees to grow. Our climate is changing again, so what of the future for our Caledonian pine forests?

Along with the changing climate there are increasing threats from tree pests and diseases spreading across the country (already exemplified by Dutch elm disease and ash dieback) – many of these pest species prefer warmer summers, so more outbreaks are expected under predicted climate change patterns. Warmer temperatures may also speed up the life cycles of pests such as pine weevil, possibly increasing damage rates. In relation to pine, there is particular concern about a disease called Dothistroma needle blight which is spreading across the UK and has already been found on some native pine trees. The fungus that causes Dothistroma needle blight is thought to be benefitting from the trend towards warmer springs, coupled with more summer rainfall, allowing more rapid spread. Earlier this year, a report by the UK’s independent committee on climate change called for “urgent efforts” to reduce the vulnerability of our forests to pests and diseases.

Our pine provenance experiment. This resource was designed and set up in 2012 by Professor Glenn Iason of the James Hutton Institute in collaboration with Forest Research, the Centre for Ecology and Hydrology and the National Trust for Scotland. Scots pine trees were grown from seed collected from 21 of the remaining Caledonian pinewoods across Scotland, to cover the range of genetic diversity inherent in our native pine populations. The trees form part of a long-term experiment which will track them until they are fully grown to test how they respond to different climates and how they differ in their resilience to different pest and diseases. The trees are growing at three sites: Glensaugh in Aberdeenshire where the climate is cool and dry, Yair in the Scottish Borders where the climate is dry but warmer, and Inverewe Gardens, Wester Ross, where the climate is warmer and wetter. By understanding the consequences of environmental and climate change and the potential for adaptation by our native populations of pine, we can help to promote resilience of our Caledonian pine forests into the future.

Laboratory and greenhouse experiments are also being carried out on other young pine trees grown from seeds from the same forests, to test the responses of the different trees to specific climate-driven events such as summer drought and late frost. This will allow us to identify which provenances and tree characteristics are the most suitable to cope with a wide range of stresses. This work will assess the future challenges and prospects for Scotland’s Caledonian pinewoods and provide crucial information for adaptive management policies to ensure that these beautiful forests continue to thrive in Scotland.

The global context. Globally, Scots pine is the most widely distributed pine and is found throughout all of Eurasia, growing across a diverse climatic range and from sea level to over 2600 metres in altitude. Its genetic diversity is known to be immense – and even within the few remaining Caledonian pine forests here in Scotland the genetic diversity is high. This should help pine to adapt to our changing climate, but given the speed of climate change and the tiny remaining area of this forest, can it adapt quickly enough? Forests are dynamic systems which naturally shift around the landscape, but the isolation of many of our remaining Caledonian forest fragments hampers movement of species as well as genetic mixing and is likely to make adaptation to climate change much harder without active intervention. Couple this with the increasing threats from pests and diseases, along with ongoing pressures from grazing which can prevent young trees from establishing, and we have a problem. The grazing has been around for a long time and 'overgrazing' can relatively easily be addressed given appropriate action. But there is still much research to be done to understand and utilise the potential within our native Scots pine genetic diversity to adapt to changing climatic conditions into the future.

Our research sits in the context of a critical need to better understand how to address these increasing threats, particularly in the context of the big push for major forest expansion in so many parts of the world. Across Europe there have been considerable efforts made to conserve the genetic diversity of tree species including pine (through a collaborative platform called EUFORGEN) to help protect these species into the future. There is also a move to create ‘native woodland networks’ to help focus restoration and expansion and reconnect isolated forests, to help species move and adapt to rapid climate change.