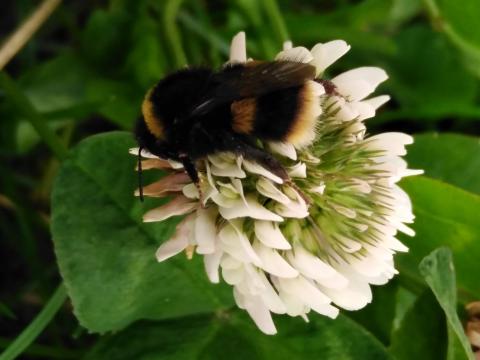 "Agricultural grasslands are often species-poor, but do they have to be like that?"

This experiment is investigating whether increasing the number of plant species in grazed grasslands can help other biodiversity and increase the quality of the forage.

Background to this work. One of the gaps we identified in the current Scottish Agri-Environment and Climate Scheme is an option for farmers to diversify their typical grasslands to improve biodiversity. There are Scheme-options for managing species-rich grassland, but this is a relatively rare habitat today and leaves most grass-based farming operations with fewer Scheme-options to bid for compared to arable farmers. We also identified that there were few options specifically focussed on pollinators.

So, how to integrate flowers for pollinators into a system where these flowers will be grazed off by livestock?

We took the view that many plant species will respond quickly to a removal of grazing by growing taller and flowering, so that the area will become a hotspot for pollinator activity. Increasing local pollinator populations would need multiple fields grazed at different times to ensure a constant availability of pollen and nectar.

Our sward diversification experiment. We established the experiment in spring 2018. We chose five treatments:

We have put together a summary of the results so far, but the main things to come out of the experiment are:

The global context. Continuing biodiversity loss is a feature around the globe and recently much attention has been focussed on the rapid declines seen in insect populations. This is true for pollinators in the UK, where there have been substantial declines in the range of many species - action for pollinators is now an urgent Government priority.